At Caversham Computers we not only like to keep up with the latest in computer systems, software, gadgets and the up and coming advances which help us in our everyday lives at work and home – sometimes we like to take a look back at how far we have actually come too.

We recently took a trip to the London Science Museum, to visit the new Information Age gallery.  This new exhibition was recently opened by Her Majesty The Queen, marking the event by sending her very first tweet.

The gallery is divided in to six zones, showing how far we have advanced in the Information Age in the last 200 years.  These are The Cable, The Telephone Exchange, Broadcast, The Constellation, The Cell and The Web. We looked back at how the first mobile and land line phone networks actually worked, looking at early mobile base stations and telephone exchanges, as well as reminiscing over mobile phone handsets many of which we have owned since the early nineteen nineties.   Also we saw early broadcast radio and TV communications and their milestones including the advent of satellite and communications and transatlantic links which lead on to today’s modern digital and wireless networks which span the globe. 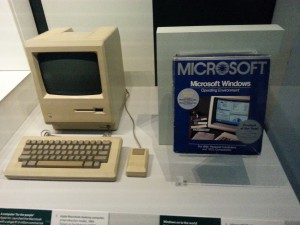 Did you use the early version of Windows 2.0?

Another favorite was the computing used in these communications, where some early Google servers from 1998 were on display, racked using low cost materials, giving them the name “corkboard servers” because cork was used to insulate and separate between the computer motherboards. 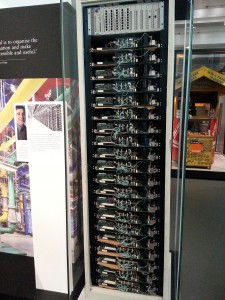 We would definitely recommend a visit to the exhibition which is free and open 7 days a week.  For more information please visit the London Science Museum Web site.